“Dion, like a circling star that never fades, generates the energy and fire we need to pull ourselves up and start again.” (Pete Townsend)

Dion may be a household name and Hall of Famer but has earned a post here as he remains relevant at 82.

Currently charting with a new record, Stomping Ground, featuring collaboration with over a dozen major artists.

Dion DiMucci had a career unlike any other in 20th century popular music, one that took him from harmonizing doo wop on the streets of the Bronx to baring his soul on a series of singer/songwriter albums in the ’70s, spending his later years bringing his blues into the 21st century. First famous for the hits he had as a teen with the Belmonts, “The Wanderer” and “Ruby Baby” were covers that established Dion as a solo star in the late ’50s, while “Runaround Sue” and “Lovers Who Wander,” which he co-wrote, revealed a songwriting talent that would flourish over the years. DiMucci kept recording after the British Invasion changed the rock & roll landscape of the ’60s, but he didn’t have another big hit until the bittersweet “Abraham, Martin and John” in 1968, a single that introduced a period as an idiosyncratic singer/songwriter, an era encapsulated on the 1975 cult classic Born to Be with You. Dion spent some time singing Christian music and oldies before returning to fresh material with 1989’s Dave Edmunds-produced Yo Frankie. From that point forward, DiMucci split the difference between R&B throwbacks and new tunes, eventually settling into a blues groove, beginning with 2006’s Bronx in Blue and stretching into 2021’s Stomping Ground.

When Dion began recording in the late ’50s, it was as the lead singer of a group of friends who sang on Bronx street corners. Billing themselves Dion & the Belmonts (Dion had released a previous single with the Timberlanes), their first few records were prime Italian-American doo wop; “I Wonder Why” was their biggest hit in this style. Dion‘s biggest single with the Belmonts was “A Teenager in Love,” which pointed the way for the slightly self-pitying, pained odes to adolescence and early adulthood that would characterize much of his solo work. 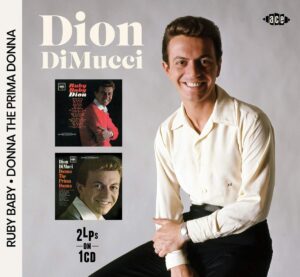 Dion went solo in 1960 (the Belmonts did some more doo wop recordings on their own), moving from doo wop to more R&B/pop-oriented tunes with great success. He handled himself with a suave, cocky ease on hits like “The Wanderer,” “Runaround Sue,” “Lovers Who Wander,” “Ruby Baby,” and “Donna the Prima Donna,” which cast him as either the jilted, misunderstood youngster or the macho lover, capable of handling anything that came his way (especially on “The Wanderer”).

In 1963, Dion moved from Laurie to the larger Columbia label, an association that started promisingly with a couple of big hits right off the bat, “Ruby Baby” and “Donna the Prima Donna.” By the mid-’60s, his heroin habit (which he’d developed as a teenager) was getting the best of him, and he did little recording and performing for about five years. When he did make it into the studio, he was moving in some surprisingly bluesy directions; although much of it was overlooked or unissued at the time, it can be heard on the Bronx Blues reissue CD.

In 1968, he kicked heroin and re-emerged as a gentle folk-rocker with a number four hit single, “Abraham, Martin and John.” Dion would focus upon mature, contemporary material on his late-’60s and early-’70s albums, which were released to positive critical feedback, if only moderate sales. The folk phase didn’t last long; in 1972 he reunited with the Belmonts and in the mid-’70s cut a disappointing record with Phil Spector as producer. He recorded and performed fairly often in the years that followed (sometimes singing Christian music), to indifferent commercial results. But his critical rep has risen steadily since the early ’60s, with many noted contemporary musicians showering him with praise and citing his influence, such as Dave Edmunds (who produced one of his periodic comeback albums) and Lou Reed (who guested on that record). Dion continued to be active as the 21st century opened, releasing Déjà Nu in 2000, Under the Influence in 2005, and Bronx in Blue in 2006. His first major-label album since 1989’s Yo Frankie, Son of Skip James was released by Verve in 2007, while 2008’s Heroes: Giants of Early Guitar Rock saw him tackling 15 songs from the classic rock & roll era. Influenced by a conversation with rock critic Dave Marsh about his long and still relevant career, and a dare from his wife Susan to prove it, Dion cut Tank Full of Blues, producing and playing the guitars himself on the recording and writing or co-writing all but one track on the set. Issued on Blue Horizon, it is the final recording in the trilogy that began with Bronx in Blue.

Dion signed to Instant Records in 2015 and immediately set to recording a new studio album. Entitled New York Is My Home, its first single and title track — a duet with Paul Simon — was pre-released in November digitally and as a striking video. The album was issued in the winter of 2016.

Then the singer/songwriter and Norton Records surprised everyone. In 1965, DiMucci was signed to Columbia, and had cut 15 new songs — all produced by Tom Wilson, who was recording Bob Dylan in the same studios at roughly the same time — for an album that the label, for whatever reason, decided not to release. Dion left the label over the decision. Some tracks were issued on singles, others later on various compilations. But for over 50 years, the tapes sat. That’s where Norton’s Miriam Linna and Billy Miller came in. They received the rights to release the entire record as it was originally intended, completely remastered from the original tapes. Featuring ten originals, one by Mort Shuman (who had co-written “Teenager in Love” with Doc Pomus for Dion & the Belmonts), and three by Dylan (who had been enamored with Dion since the ’50s). Though Miller passed before it was issued, Kickin’ Child: The Lost Columbia Album 1965 was released by the label in May.

In 2020, Dion released Blues with Friends, a collection of original blues songs performed as duets with such superstar pals as Bruce Springsteen, Paul Simon, Van Morrison, and Billy Gibbons. The album was released by KTBA Records (it stands for “Keeping the Blues Alive”), which brought out a similar set in November 2021, Stomping Ground. Another star-sprinkled set of original songs, Stomping Ground featured guest appearances from Rickie Lee Jones, Boz Scaggs, Keb’ Mo’, Mark Knopfler, and many more. In between those two albums, in November 2020, Dion issued a Christmas single, featuring his versions of “Hello Christmas” (featuring Amy Grant) and “You Know It’s Christmas

Artist Biography by Richie Unterberger – via All Music Guide